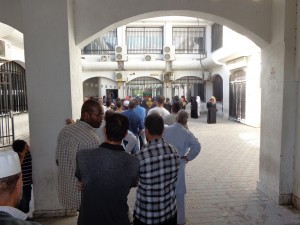 Crowds have again been massing outside banks today in the hope of being able to withdraw cash following the arrival of a second delivery yesterday of LD 400-million-worth of new banknotes.

The delivery from a British money printing company was announced today by the Central Bank of Libya (CBL) on its Facebook page.  There was a similar LD 400-million shipment last week.  A third delivery of another LD 200m is expected in the next few days.

Despite last week’s delivery and reports that the banks are letting customers withdraw up to LD1000 a month, residents in the capital complain that the maximum they are being allowed is actuallyLD200, and in many cases nothing at all.

“Where is the money going”? one resident asked this newspaper, suggesting that the CBL was actively trying to stir up resentment against the Presidency Council.

The CBL, though, says that it has been distributing cash to banks “throughout Libya”. It mentions in particular eastern Libya, Sebha, Jufra, Obari, Ghat, Misrata, Jebel Nafusa and the area west of Tripoli.  But not the capital, home to over a third of the country’s population.

After Serraj in a Sunday Alassema TV interview was highly critical of Saddek Elkaber’s management of the bank and its failure to end the liquidity crisis, the CBL governor yesterday came out fighting accusing the chairman of the Presidency Council of ruining the country’s economy by failing to produce effective economic programmes.

He maintained that the PC had not acted on the CBL’s advice. Specifically he said that in January  this year, which was when the PC was still working from Tunis, the CBL working with the World Bank, the International Monetary Fund and local financial experts had presented a wide-ranging financial plan that it believed it was able to fund.

In a letter to Serraj which has been leaked, Elkaber said yesterday “You made accusations  without defining specific cases in which you thought that the bank has failed to discharge its obligations”.

Serraj had accused the CBL of not protecting the value of the dinar. Elkaber retorted that he had presented the PC with a plan to halt the currency’s slide but that it could not start selling hard currencies because of the low oil export income.

Moreover, Elkaber said the the CBL gave the PC LD1.5 billion as an emergency budget to be paid in three instalments.

In normal circumstances such a serious confrontation between a central bank governor and a government chief would damage international confidence. With no such confidence to damage, the likely consequence is a further decline in the value of the dinar which today was reported to have hit LD5.25 to the dollar on the black market.