Another mass killing of bound victims in Benghazi 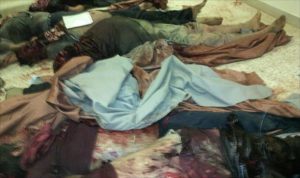 Some of the latest Benghazi massacre victims (Photo: Benghazi police)

There appears to have been another mass execution in Benghazi. Police today found the bodies of ten men all of whom had been handcuffed and shot. The corpses were taken to Benghazi Medical Centre where a source told this newspaper that one been identified but the names of the other victims were not yet clear.

This is the second known mass killing in the city this year. In July 14 bodies were discovered on a rubbish dump near the social security headquarters.  Their arms and legs had been tied, there were signs of torture and they had all been shot in the head.

There was a similar crime in Tripoli this June when the bodies of at least 12 former Qaddafi soldiers were found in different locations. They had been held in Mitiga and Ruwaimi prisons until their release was ordered by a court. The Tripoli Revolutionaries’ Brigade of Haithem Tajouri denied rumours that it had been responsible.

The killings in the capital came as increasing lawlessness took hold there. By contrast, in Benghazi police are back on many streets and are supported by the army. The embarrassment will be compounded in that the murders happened under the noses of security forces and because, as with July’s massacre, there will be fresh accusations that they themselves were involved. Benghazi police promised in July to find the culprits. They have not yet done so.