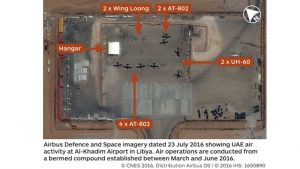 The illustration from the IHS Jane’s article

The United Arab Emirates is flying warplanes out of a remote airbase near Marj, according to a widely-consulted international defence publication.

IHS Jane’s says that the UAE is operating propeller-driven AT-802U light aircraft, helicopters and surveillance drones from the Al-Khadim airport to the south-east of Marj and Jardas Al-Abid.

The publication has produced a photograph dated 23 July 2016 which it says shows six AT-802s (also known Air Tractors because the US aircraft was originally developed for crop spraying), two Black Hawk helicopters, two drones and an Ilyushin Il-76 transport aircraft. The image is credited to Airbus Defence and Space satellite imagery. 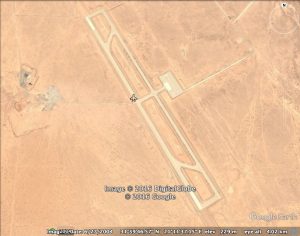 A Google Earth shot of Al-Khadim from 2004

Jane’s  wrote that at the start of the year there was little development at the airfield. Indeed a Google Earth shot from 2004 shows a runway and aprons but no sign of any buildings whatsoever. The lack of runway tyre marks suggested that the airport, which has the International Civil Aviation Organisation  (ICAO) code “HL59”, had never been used. Given the steep hillsides not far away from the part of the wadi by which it sits and its isolation from any urban area it is hard to understand why the airport should be there. However under Qaddafi, all airports had a dual civil and military role.

Jane’s said that in March changes began when new buildings and an aircraft dispersal area was seen in satellite imagery. By June there were hangers under construction.

The report refers to a photograph on social media at about this time which it said shows an AT-802 Air Tractor “which had been modified by the US company IOMAX so that it can carry an electro-optical pod, guided bombs, missiles rockets and guns”. It noted that it was unclear where the photograph had been taken.

All the aircraft types are listed as being used by the UAE. However, Jane’s does not describe how it has made its positive identification of the nationality of the planes at Al-Khadim.

There has so far been no reaction to the article from Hafter’s HQ in Marj nor from the UAE government.