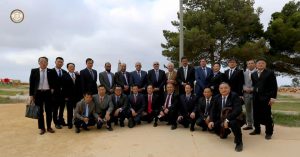 The Chinese business delegation that earlier this week held talks with the Thinni administration in Beida and agreed in principle to invest in the development of Tobruk, has been in Benghazi to see if the situation is safe enough for the return of Chinese companies to complete building projects there.

Following talks on Thursday with the acting mayor of the city, Ahmed Al-Oraibi, as well as with municipal officials and a number of Benghazi members of the House of Representatives, the delegation toured the city to see the security situation for themselves. According to the municipality spokesman Mutassem Al-Faituri, they also visited Benina airport to assess construction possibilities.

There are scores of unfinished and now derelict apartment blocks in several part of the city built by the China State Construction Engineering Corporation (CSCEC), abandoned during the revolution.

In 2013, CSCEC signed an agreement with the then Benghazi Local Council to resume work on 20,000 housing units, but the deteriorating security situation prevented any further action.