A report from the House of Representative’s financial controller alleging corruption and financial mismanagement among some HoR members and staff has created a political scandal in the east of the country.

The report implicates the HoR’s chief of staff Abdullah Al-Masri and even the president, Ageela Saleh, to whom it was sent. The controller says he wrote a number of times to Saleh about his concerns but that the president never responded.

On Monday morning, responding to social media rumours about the report, HoR spokesman Abdullah Bulaihak, who is also mentioned in it, dismissed it as a fake, warning the media and social networking sites not to publish anything about it. However, that has not stopped the damage. According to an HoR source, who insists that the report is genuine, there have since been a number of confidential meetings involving members concerned both about the charges and the potential repercussions.

A senior Libya political analyst who did not want to be named agreed that there could be major ramifications as a result, but suggested that the scandal had been be orchestrated by staff intent on discrediting the HoR and its president.

There are alternative suggestions that the real target is Al-Masri, and that a number of HoR members are behind the claims.

Ageela Saleh,currently in Egypt attending a meeting of the Arab Parliament, has made no comment so far but it is thought that with his return to Libya from the Arab Parliament meeting in Egypt he may have to convene a HoR session to discuss the allegations. 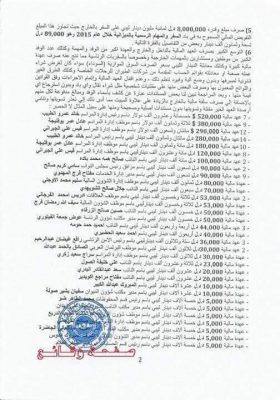 First big international meeting in Tripoli since May 2014 security collapse