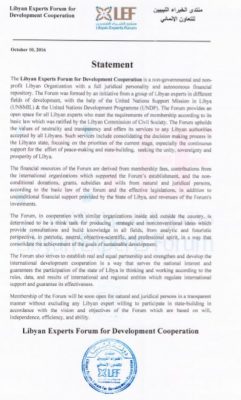 The recently formed Libyan Experts Forum for Development Cooperation issued a statement  yesterday clarifying its objectives, role and make up. The Forum was suggested by UNSMIL and UNDP-Libya after the two bodies had organized a number of meetings of various Libyan experts to prepare policy papers for a Libyan unity government. The experts included male and female academics from all over Libya as well as a number of former ministers, businessmen, journalists, activists government officials and NGOs.

The NGO is intended to act as a neutral think-tank and policy advisory body to any unified Libyan government. There has been some lack of clarity and maybe even misunderstanding about the role and make up of the NGO or even its political neutrality in Libya which has led to its governing body releasing the following statement:

”The Libyan Experts Forum for Development Cooperation is a non-governmental and non-profit Libyan Organization with a full juridical personality and autonomous financial repository. The Forum was formed by an initiative from a group of Libyan experts in different fields of development, with the help of the United Nations Support Mission in Libya (UNSMIL) & the United Nations Development Programme (UNDP). The Forum provides an open space for all Libyan experts who meet the requirements of membership according to its basic law which was ratified by the Libyan Commission of Civil Society. The Forum upholds the values of neutrality and transparency and offers its services to any Libyan authorities accepted by all Libyans. Such services include consolidating the decision making process in the Libyans state, focusing on the priorities of the current stage, especially the continuous support for the effort of peace-making and state-building, seeking the unity, sovereignty and prosperity of Libya”.

”The financial resources of the Forum are derived from membership fees, contributions from the international organizations which supported the Forum’s establishment, and the non-conditional donations, grants, subsidies and wills from natural and juridical persons, according to the basic law of the forum and the effective legislations, in addition to unconditional financial support provided by the State of Libya, and revenues of the Forum’s investments”.

”The Forum, in cooperation with similar organizations inside and outside the country, is determined to be a think tank for producing strategic and nonconventional ideas which provide consultations and build knowledge in all fields, from analytic and futuristic perspective, in patriotic, neutral, objective-scientific, and professional spirit, in a way that consolidate the achievement of the goals of sustainable development”.

”The Forum also strives to establish real and equal partnership and strengthen and develop the international development cooperation in a way that serves the national interest and guarantees the participation of the state of Libya in thinking and working according to the rules, data, and results of international and regional entities which regulate international support and guarantee its effectiveness”.

”Membership of the Forum will be soon open for natural and juridical persons in a transparent manner without excluding any Libyan expert willing to participate in state-building in accordance with the vision and objectives of the Forum which are based on will, independence, efficiency, and ability”.

Committed to LPA, France wants "to promote a spirit of compromise in Libya": French ambassador