Marj councillor asks for military mayor to be appointed 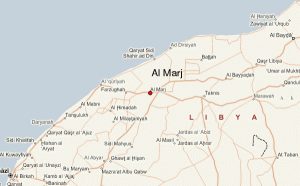 Marj looks set to become the latest town to be controlled by the military. One of the councillors has requested the governor of Cyrenaica, Major-General Abdul Razzaq Al-Nazhuri, who is also the army chief of staff, to appoint an officer to take it over.

However, Marj is already firmly under the control of the Libyan NAtional Armed.  It is where armed forces commander-in-chief Field Marshal Khalifa Hafter has his headquarters.  As such, it is one of the most tightly-controlled locations in Libya with regular checkpoints.

The local council has not been one of Libya’s most effective. After its mayor Massoud Adam Omar was sacked last December for mismanagement by the Beida government, the council largely stopped working.

Nonetheless, there has been widespread unease at the unravelling in the east of the structure of elected municipal councils, arguably the main success of the country’s democratic process. Starting with nearby Beida almost three years ago,  over 90 municipalities have held elections.  The councillors then choose the mayor.

Not all of the municipalities have been a success, however. Under the often-absent Mahdi Harati, the administration of Tripoli Central became a disaster, until he was fired by his colleagues. Benghazi council did little better. When this summer Nazhuri replaced Benghazi mayor Omar Barasi and his squabbling fellow councillors there was general relief in the city.

In the last two months, the military has also appointed new mayors in Kufra, Ajdabiya, Al-Abyar and Shihat.

But at least two municipalities, Soloug and Beida have pushed back against Nazhuri’s’s attempt to do away with them. In Beida, the popular and successful mayor Ali Hussein Mohamed declined to go and was backed by his fellow councillors as well as opinion in the town. Importantly, he also has the strong support of the Hassa tribe.