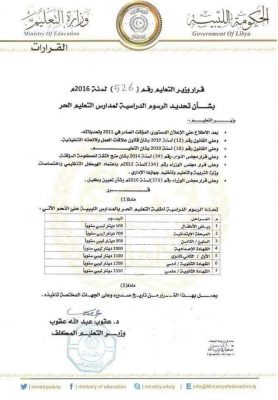 The interim continuing government based in Beida has issued an order to private schools in Benghazi to cut their fees by at least a half.

It follows complaints from parents who say they are forced to use the private sector because of state schools being closed but cannot afford the prices.

Many state schools in Benghazi have been closed because they are in or near areas of fighting (such as Suq Al-Hout, Sabri, Ganfuda, Gwarsha and downtown), have been damaged, or taken over to house refugees from other places. Almost all schools in Fuwayhat district, for example, are closed. Most of those that are operating are consequently massively overcrowded as a result, with many trying to cope by introducing afternoon sessions.

As a result the number of private schools has mushroomed but are charging prices that are beyond the ability of average Benghazinos to pay them. A private kindergarten place is LD 1,500 a year, primary school LD 1,700 and middle school LD 2000. For someone with three or four children and earning no more than LD 1,000 a month, the cost is unsupportable, especially with consumer prices continuing to rise.

There are claims that most of the private schools offer no better education than the state ones and in fact have lower standards, employing unqualified and underpaid staff.

Last month, the head of Benghazi Security Directorate, Colonel Salah Hwaidi, warned owners of private schools that they would be punished if they did not drop their prices. He now says that those who do not comply with the government order will be arrested.

It is thought that many owners will comply but it likely that some will close their schools, causing yet further problems.

Schools are due to reopen for the new academic year on 24 October.

The new, imposed rates are as follows (average previous charges in brackets)

Southern commanders distance themselves from Hafter