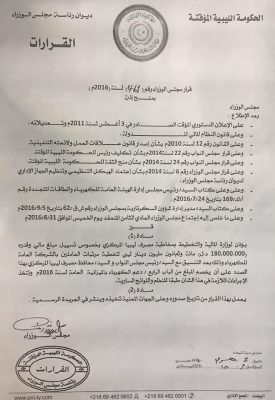 The government of Abdullah Al-Thinni, prime minister in the eastern-based administration linked to the House of Representatives, has ordered an increase in salaries of staff at the state electricity company GECOL by LD 180 million. The administration’s finance and planning ministry has been told to obtain approval from the House of Representatives and then implement the increase with the Central Bank of Libya.

The move is an attempt to help solve the current power supply crisis which has seen massive power outages across the country. Part of the problem is that power lines between east and west have been severed as have lines in the south. Increasing salaries is seen as likely to ensure that GECOL staff repair the damage as soon as possible.

The increase is, however, unlikely to be paid. The CBL pays salaries for all government employees whether in the east or west. It is not, however, increasing them nor is it paying new budget allocations, either by the Thinni administration or the Presidency Council in Tripoli.

Anarchy as Tripoli militias fight after the Rixos coup