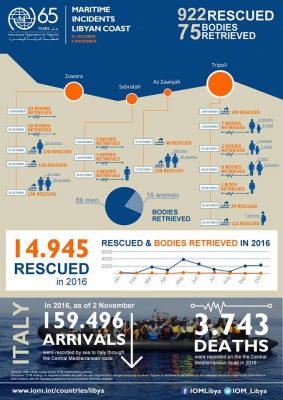 The International Organization for Migration (IOM) Libya reports that there have been 922 migrants rescued and 75 bodies retrieved off the Libyan coast between 21 October and 3 November this year.

The report on maritime incidents off the Libyan coast says that a total of 14,945 have been rescued in the Mediterranean in 2016.

The report indicates that most of these maritime activities either originated from or took place off the 118 km stretch of coastline between the capital Tripoli and the western city of Zuwara.