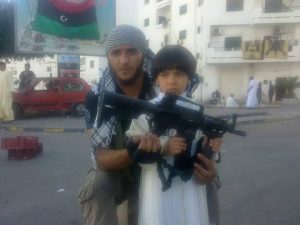 Ayoub Ali Al-Buashi with boy believed to be his son (Photo: Rada)

In the second deadly attack on Tripoli’s Rada (Deterrence) forces in just over a week, two members were shot dead on Sunday evening in a targeted attack outside a shop in the city’s central Zawiat Al-Dahmani area. According to Rada forces, Ayoub Ali Al-Buashi died instantly and Jamal Al-Shweidi died later in hospital of his injuries.

Eyewitnesses say the killers were masked and used a vehicle without number plates.

Insisting that it would not rest until the perpetrators had been hunted down, Rada also said that the killings would not stop it from tackling criminals and vandals.

On Friday 28 October, a member named only as Kamal was killed when Rada forces demolished a house in the neighbouring Fashloum district belonging to someone described as a criminal by the force.

Suggestions that the two incidents may be related have been rejected the head of Rada’s information office, Ahmed Ben Salem. Speaking on TV last night, he said he did not believe it to be the case although he indicated that Al-Buashi may have been involved in the Fashloum demolition.

There is also now a deepen divide between the Rada forces, led by Abdul Raouf Kara, and Islamist “revolutionaries” in the city, linked to grand mufti Sadek Al-Ghariani, Khalifa Ghwell, Salah Badi and a number of Benghazi hardliners such as Wisam Ben Hamid who are now based in the capital.

A number of Benghazi members of Ansar Al-Sharia and other militant forces are said to be being held by Rada. Yesterday evening’s attack comes just two days after a military rally and parade in the city’s Martyrs’ Square by a group named “The Libyan Brigades of Revolutionaries” which in a statement afterwards demanded the release of its colleague held in Tripoli. Last July Wissam Ben Hamid accused Kara and Rada of being part of a “malicious clique”. Ghariani has also accused Rada of cracking down on revolutionaries from Benghazi.