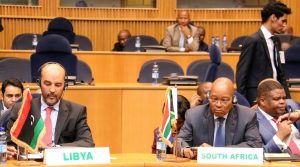 Despite insistence from the head of the African Union Commission, Ms Nkosazana Dlamini-Zuma, that the “dire situation in Libya cannot be allowed to continue”, African leaders attending a mini-summit on the Libyan crisis held in the Ethiopian capital today were given little encouragement that the a breakthrough was on the horizon.

Chairing the meeting, Chadian President Idriss Deby who is the AU’s current head said that the AU could not support any military intervention in Libya by anyone hoping to try and normalise the situation there. Instead, international efforts to promote peace had to be followed and respected.

The mini-summit was convened by Deby to assess the situation and international efforts to resolve it.

Despite the Chadian president’s stated opposition to military intervention in Libya, there are unconfirmed but persistent reports that he has been involved in the supply of trained foreign fighters, mainly Sudanese, for Field Marshal Khalifa Hafter and the Libyan National Army.

Two days ago, the Presidency Council’s acting defence minister, Al-Mahdi Al-Barghathi, claimed that the forces which seized the central oil crescent region during the late summer were foreign mercenaries.