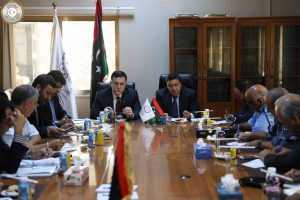 A special unit to crack down on crime is to be set up following an emergency security meeting called by Presidency Council chairman Faiez Serraj.

The new force is supposed to get a grip on the falling security security and rising crime particularly in an around Tripoli.  Serraj said it should be established to target carjackers, kidnappers and robbers.

Serraj told interior minister-designate Arif Salih Khojja that he wanted the unit to be operational by next week.  The attorney general’s office and the public prosecutor should work with law enforcers to ensure fair but speedy trials.

Serraj said that no criminals should expect to get away with their crimes but should be hunted down wherever they were and then prosecuted.

Serraj will tomorrow travel to a Malta meeting of the Libyan Dialogue where the PC’s poor security record is likely to once again come under the spotlight.