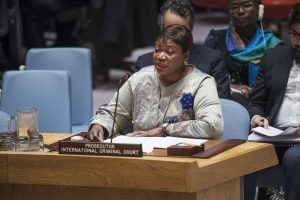 Five years after it last issued indictments, the International Criminal Court’s chief prosecutor Fatou Bensouda has announced it will return to Libya to investigate war crimes. Because of the lawlessness and violence in the country and the ability of perpetrators to act with impunity, Libya would be a priority for the ICC in 2017.

Bensouda told the UN Security Council in New York on Wednesday that she intends to assemble cases for new indictments, some made public and others confidential (or “sealed” – so those indicted only find out they are facing trial when they are arrested in a third country). She said her office intended to apply for arrest warrants “under seal as soon as practicable and hopes to have new arrest warrants served in the near future”.

With Libya in chaos and confronted with violence across the country, Bensouda said: “The situation continues to deteriorate and innocent civilians continue to bear the brunt of the fighting between the warring factions vying for control of Libyan territory. The current state of affairs, in which civilians are victimized, is completely unacceptable.”

The prosecutor gave no reason why there had been a four year stasis in ICC investigations in Libya, despite the rise of ISIS and civil war.

The civil right group Lawyers for Justice in Libya (LFJL welcomed the statement from Bensouda saying it “offers a renewed prospect of ending the absolute impunity enjoyed by those who have carried out human rights violations in Libya.”

It said the international community should back up the ICC, both with finance for investigations, and with an information campaign to help Libya’s public better understand the court’s role.

“It is vital that the ICC is perceived to be an impartial ally, which is interested in working with Libyans to realise justice and accountability for grave crimes, and not as unilateral force motivated solely by its own institutional interests,” said LFJL director, Elham Saudi.

There are, though, concerns among some Libyans that the ICC may be motivated by western opposition to Khalifa Haftar and his campaign against Islamic militants in Benghazi.

The ICC was ordered to investigate Libya by the UN in March 2011, with the anti-Qaddafi uprising at its height, and amid fears that the former dictator was set to carry out massacres of civilians.

In June of that year, three indictments were issued – for Qaddafi, his son Saif Al-Islam and intelligence chief Abdullah Al-Senussi. In the event, neither man went to the ICC court in The Hague. Saddafi was caught and killed by rebels in Sirte, while Libya failed to hand over either Senussi or Saif after their capture.

The ICC agreed three years ago that Libya could try Senussi itself, who was sentenced to death in July last year by a Tripoli court, a trial that attracted controversy with human rights groups and UN monitors saying due process was not followed.

Senussi remains incarcerated in a Tripoli prison with the justice system in chaos. Saif remains in Zintan under authorities who are not cooperating with the UN-backed Presidency Council and its Government of National Accord (GNA).

Bensouda’s comments have surprised some observers, because since the June 2011 indictments there have been no further actions by the court, despite civil war breaking out in 2014 and ISIS committing numerous crimes in Libya through 2015. Her decision to investigate ISIS now, as it faces imminent defeat from Misratan-led forces, backed by US air strikes, means it may be too late to find anyone to indict.

The chief prosecutor said she will also investigate migrant smugglers and criminal acts against migrants “including any alleged acts of sexual violence or crimes against children” that come under the court’s jurisdiction. She added that her office is already investigating those involved in organised crime and the financing of migration, although whether this comes under the ICC remit is for the moment unclear and will be determined by ICC judges.

The prosecutor urged the GNA to hand Saif over to the ICC, noting that he remains in Zintan. Earlier this year Saif’s ICC defence lawyer Kharim Khan claimed Saif had been set free in Zintan, although his location remains unclear. There are also doubts as to whether the claim was true.

The eye-catching aspect of Bensouda’s speech is her decision to use sealed indictments, a facet of war crimes justice under which a charge is made, but not made public. In previous years, this device has been used to snare suspects when their own states refuse to hand them over. The suspect, unaware that they face charges, travels abroad, only to be arrested at the airport and transfered to The Hague.

Also intriguing will be whether, in Libya’s tangled factional labyrinth, Bensouda can assemble cases in which a chain-of-command can be proved between war crime and commander. The ICC is configured to go after those most responsible for war crimes, focussing on leaders and commanders rather than foot soldiers. But for such charges to stick, the judges must be convinced that a suspect was, in fact, in charge of those accused of the crime, a difficult thing to prove within Libya’s ever-changing militia landscape.

The ICC has been one of the most unsuccessful courts in world history. Unlike UN war crimes courts for former Yugoslavia, Rwanda and Sierra Leone which have convicted more than 100 war criminals, the ICC, which is separate from the UN, has convicted just three individuals in its 14-year history after spending more than $2 billion.

Only Africans have ever been tried or indicted by the court, and some African governments have begun to quit membership.