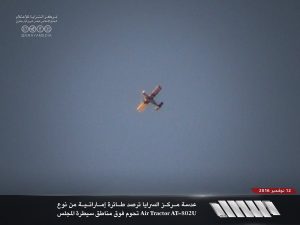 Militants in Benghazi fired six shells at Benina air base today in reprisal for an air raid in Ganfouda by Libyan National Army aircraft in which a family home was hit, killing the one man and seriously injuring the rest of the family. Two foreign workers, an Egyptian and a Chadian are also said to have been killed in the Ganfouda raid.

There are no reports of any casualties in the Benina attack which did not penetrate the airbase. However, according to Benghazi Defence Brigade which is linked to the militants in Ganfouda, the man’s daughter was badly burned in the raid, and other members of the family were buried in the ruins of the house.

No further details about them have been provided but the girl was reported to be being treated at the militants’ field hospital in the besieged district.

Yesterday also saw air raids on Ganfouda and a shell landing near Benina while another also fell in Laithi. In both latter cases, there was again no damage done.