Celebrations in Benghazi after LNA announce capture of Gwarsha 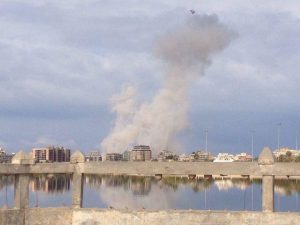 People took to the streets in Benghazi this afternoon celebrating the liberation of the city’s Gwarsha district from militants after the commander of the Libya National Army’s Operation Dignity announced that it had finally been taken.

The LNA also announced that it had moved forwards deep into Ganfouda from the east and now controlled the customs warehouse where it found the bodies of 15 militants.

Today’s fighting unfolded first the capture of the European hospital in Gwarsha but then turned into something of a rout. It involved ground, air and, off Ganfouda, sea power by the LNA. There was also an air strike on militants in the Suq Al-Hout in the city centre which an LNA official said hit the intended target, with a truck being seen to remove bodies afterwards.

The clashes were reported as being “very violent” near Ganfouda’s residential area beside the customs warehouse, where the militants tried to use suicide drivers to hold off the LNA. In one attack against the Zawia Martyrs’ Brigade at the customs warehouse, a tank crew from 204 Brigade died when the suicide vehicle exploded.  Earlier, Akram Bukhamada, the son of Saiqa commander Wanis Bukhamada posted a note on social media saying that another attack on the Zawia Martyrs’ Brigade at the warehouse failed. It is not known if it was the same tank. There was at least one other attempted suicide attack.

Altogether though, it is reported that 15 LNA soldiers were killed in today’s actions and 43 wounded. Among those who died was an LNA field commander, named as Hatem Al-Mismari, killed in a landmine explosion in Gwarsha.

There are no official figures of the militants’ casualties other than the 15 bodies found in Ganfouda. Two militants were discovered hiding in Gwarsha and surrendered to the LNA. 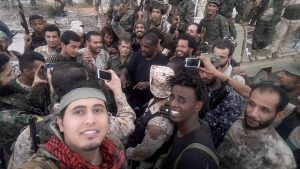 Commenting on the Ganfouda advance, the LNA’s spokesman, Colonel Ahmed Mismari said that civilians in the area had not been harmed. However, all efforts would now be concentrated on the liberation of the district and families still there should try to head towards LNA lines.

Responding to the developments, Benghazi Medical Centre issued an appeal to all its doctors to go to its emergency department.

Fighting this evening in Ganfouda was reported to be very heavy as the trapped militants tired to defend their last stronghold.