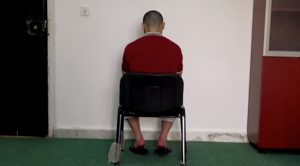 A French national has been captured at an Islamic State (IS) training camp and is being held at Benghazi’s Grenada military prison. A video of him was broadcast yesterday by French TV channel M6 but it did not state where he was arrested nor did it name him. It said he was of Algerian origin and from the east of France.

Questioned by a French reporter, the man said he had been a second-hand car salesman and that was he had gone to Libya planning to move on to Syria and join the Nusra Front, the jihadist organisation previously part of Al-Qaeda. He had not intended to join IS.

He refused to send a message to his family on the basis that French intelligence would then know who he was.

There have been reports of European nationals fighting with IS in Libya but this is the first time a suspect has been arrested. Last year two French nationals were arrested in the south of Tunisia, near the Libyan border, apparently planning to cross over and train in Libya before likewise heading to Syria. They, however, wanted to join IS.