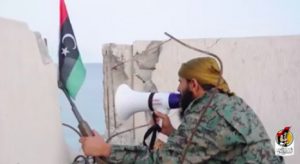 Bunyan Marsous fighters are slowly blasting their way through the remaining properties in Sirte’s Marine Giza district in which IS terrorists are holed up.

According to the BM operations room, 37 fighters have been killed in the course of the last 48 hours, a number of them found wearing suicide vests. Photographs of some of the corpses appeared to show blast injuries, almost certainly from the 13 American air strikes that went in today.  The US African command said that 50 “fighting” positions had been targeted. American have now launched 411 air attacks since the start of August.

A BM commander used a megaphone to call on civilians to surrender and to the surviving terrorists to lay down their arms. Posted footage showed three black garbed women with their hands held high in the air, nervously making their way toward BM lines.  It is not known if any terrorists also sought to quit. No pictures have appeared recently of wounded or captured IS members. 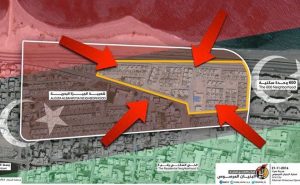 The area remaining in terrorist hands now amounts to little more than a few dozen properties. However advancing forces continue to be delayed by booby traps and mines.  Some BM units have been pulled back from the narrow frontline and are waiting to relieve comrades as necessary.