Hafter in Moscow for arms talks 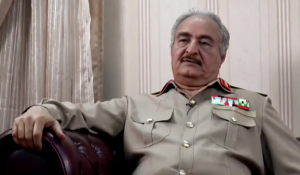 Field Marshal Khalifa Hafter, the commander of the Libyan armed forces appointed by the House of Representatives (HoR) is in Moscow where he has had talks on support and training with Russia’s defence minister Sergey Shoigu and foreign minister Sergey Lavrov.

Hafter was last in Moscow in June when he discussed weapons supplies, including aircraft spares, plus Moscow’s potential role in helping bring about a settlement in Libya with Shoigu and Russia’s national security boss Nikolai Patrushev.

Last week, in an interview with French TV channel M6, Hafter called on the international community to end the arms embargo saying it was holding back Libya in the fight against the so-called Islamic state.

It was a call he had made before. Two months ago, it was reported by Russian daily Izvestia that Libyan ambassador in Riyadh Abdulbasset Al-Badri, who is close to the field marshal and who was visiting Moscow at the time, had discussed sending arms with deputy foreign minister Mikhail Bogdanov. This, however, was subsequently denied in a report by the Beida-based office of the Libyan news agency LANA by sources close to Hafter.