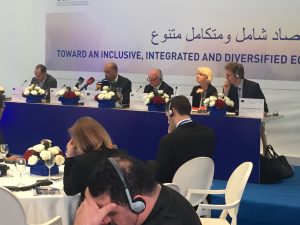 Libya has to break with the culture of dependency on the state and needs instead one of entrepreneurship, Libyan politicians, mayors and officials were told in Tunis today. They were attending a conference on entrepreneurship organised by SLEIDSE (Support to Libya for Economic Integration, Diversification and Sustainable Employment), which is funded both by the EU and the French government.

Encouraging a spirit of enterprise was particularly important among younger people, Libyan ambassador to France Alshiabani Abuhamoud told the conference which took place in the city’s Bardo Museum. They, and women, were the most affected by unemployment, he noted. Ensuring jobs for the country’s youth would help deal with the security problem and prevent them being lured to extremism and criminality, he said, adding that the economy could be Libya’s unifying factor, undoing the damage that politics had created. But because the current system prevented youth from finding jobs in the market the result was that young people, having become victims of radicalisation, were now the fuel for the current conflict in Libya.

Similar messages about the need for entrepreneurship came from Presidency Council member Musa Koni as well as the EU and French ambassadors.

The turbulence in Libya and the damage to education, EU ambassador Bettina Muscheidt said, was putting at risk an entire generation. It was vital, French ambassador Brigitte Curmi said, that Libyan youth be offered opportunities so that they had faith in the country’s future. In particular, youth needed to find opportunities in the private sector. Relaunching development was key to bringing about peace in the country. France, she added, gave particular attention to putting Libya back on its feet.

For his part, Koni stressed the importance of entrepreneurship in Libya, adding that it was part of the radical solutions that Libya needed to overcome its present difficulties.

France’s foreign trade minister Matthias Fekl, said that his country wanted to help create a climate of development in Libya, but this would necessitate reforming its financial institutions. However, Libya was full of talent, he said, and the presence at the conference of people from all over Libya proved that a solution to the problems was possible.

In fact, the conference was not totally without its own problems.

One of the attendees, Tobruk mayor Farag Yassin, boycotted the proceedings, remaining in the museum lobby when he discovered that Musa Koni had been invited as a main speaker.

“It was said to be an economic meeting to which only municipalities and universities would be invited. I didn’t know Mr Al-Koni would be a guest as well. That is why I decided to boycott the meeting”, Yassin told the Libya Herald.

A strong ally of the Beida-based Thinni government, he added that he was very “disappointed” seeing French Ambassador Brigitte Curmi sitting next to Koni on the podium.

“Mr Koni is a guest of honour [here but] he can’t even invite economic experts to Tripoli because of the security [there]. The Europeans and French should focus on Cyrenaica to develop business because they can go to every city”, he added, mocking the Presidency Council which he said controlled “merely one square kilometere in Tripoli”.

One other bone of contention was the non-appearence of Central Bank of Libya governor, Sadek Elkabber, who was nonetheless is Tunis at the time. He had been listed to attend. Tripoli mayor Abdulraouf Beitelmal said the main reason he had decided to attend was to speak to Elkabber.  Others also said they had wanted to question him about why the CBL was not releasing funding.  Misrata businessman and House of Representatives member Mohamed Raeid said that Elkabber was now one of the top problems in Libya and that he had to be removed.

SLEIDSE has a budget of €7.8 million (€7.6 from the EU and €200,000 from France) to help young business people and develop small and medium enterprises throughout Libya.

Conference attendees were told that since it started in 2014 it had been operating online entrepreneurship courses which a thousand Libyans from all over the country had already joined, and three thousand more had expressed interest in joining.

Some 12 municipalities and a number of universities have signed MOUs with SLEIDSE to develop entrepreneurship courses.