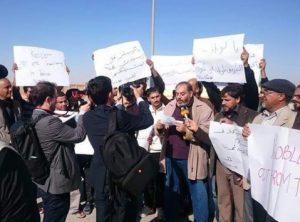 Tobruk airport was picketed by angry demonstrators today protesting a visit by UNSMIL chief Martin Kobler. Inside the airport building Kobler had talks with members of the HoR headed by its deputy president Emhemed Shouaib.

Outside the terminal protestors held up placards saying that Kobler was not welcome in the town and that UNSMIL was responsible for Libya’s fragmentation.

An UNSMIL spokesman denied to this paper that Kobler had intended to travel into Tobruk for his meetings. He said the talks with Shouaib had always been slated for the airport. It is unclear however if the demonstrators managed to stop other members of the HoR from reaching the appointment with the UNSMIL chief.

This blockade is a reprise of action taken by protestors in March 2015, when Kobler’ predecessor, Bernardino Leon was penned into the airport and unable to make it into town to meet HoR president Ageela Saleh. Leon had been welcomed on the tarmac by Thinni’s foreign minister Mohamed Dairi. However, the press of protestors meant they were unable to move beyond the terminal building. Leon called Saleh asking if he could come out to the airport for the planned talks. For reasons that were never made clear the HoR president was unable to do so.