56 percent of migrants in Libya not heading for Europe: IOM 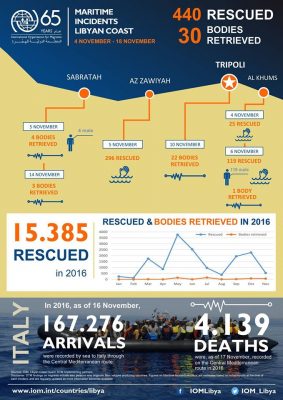 Most migrants in Libya want to remain in the country and do not intend to head for Europe. The revelation came in the International Organization for Migration’s (IOM) latest Libya Displacement Tracking Matrix Flow Monitoring Analytical report.

Libya remains the main country of intended destination for 56 percent of all 1,946 migrants surveyed, with 17 percent destined for Italy, 7 percent to Germany and 5 percent to France, the report says.

The demographic age of migrants surveyed were in their twenties, averaging 29 and 98 percent were male. Most were from the countries bordering Libya: Niger, Egypt and Sudan. Nigerians were the fourth most represented group making up 10 percent of those surveyed.

Economic reasons were given by 88 percent of all respondents as the main factors driving them to leave their countries of origin as well as the main reason determining migrants’ choice of destination. Seventy-four present of respondents said that they had spent over 6 months in Libya.

The IOM says that by interviewing migrants directly its reports highlight the complex and varied nature of migratory patterns and mobility trajectories of those who travel to Libya.

These figures compare to the latest statistics reported by the IOM of 167,276 migrant arrivals to Italy from the Central Mediterranean (overwhelmingly from Libya) and 4,139 deaths up to 17 November.

Over 600 migrants rescued off Libya: one dead and many missing