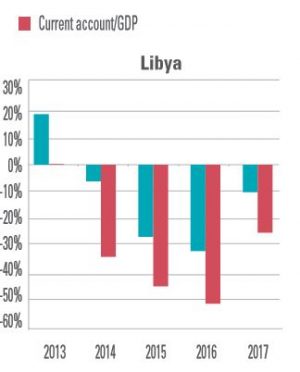 The Arab Spring revolutions have cost the MENA region US$ 614 billion of lost economic growth equivalent to 6 percent of GDP, UN agency ESCWA says in a report published yesterday.

The report, entitled the Survey of Economic and Social Developments in the Arab Region 2015-2016, says that real GDP growth in the region was 0.9 percent in 2015 and is forecast to be 1.5 percent in 2016. It says that uncertainty continues to restrain the region’s prospects for growth and job creation.

Domestic demand in Libya has crashed in the wake of political instability and armed conflict. A degree of oil and gas production was maintained, but it was insufficient to prevent the Libyan economy from shrinking, the report said.

The current account deficit of Libya widened quickly in 2015 because of the sharp fall in energy exports.

The Maghreb as a whole is projected to experience 0.7 per cent economic growth in 2016. The continuing contraction in the Libyan economy will lose pace. Although Libya is not under tight financial constraint, the political situation may preclude policymakers from utilizing funds efficiently to tackle balance of-payments and fiscal constraints. 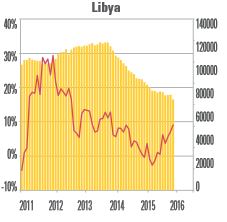 Armed conflicts and violence in Libya have continued to impede socioeconomic development, not only in Libya but also in neighbouring Tunisia. Balance-of payments conditions have generally tightened and foreign funds have become less available to countries with current accounts deficits. A slow recovery is expected and the average real GDP growth rate in the region is projected to reach 1.5 per cent in 2016.

The estimated average growth rate of the gross domestic product (GDP) in the Arab region in real terms was 0.9 per cent in 2015, unchanged from the rate registered in 2014. Oil prices, falling since mid-2014, have strained the economies of Arab countries, which were further pressured by armed conflicts and political instability.

Armed conflicts Libya continued, and employment opportunities in the region were further limited by the stagnating economic situation. As a result, there was a massive increase in refugee and migrant flows to Europe in 2015.