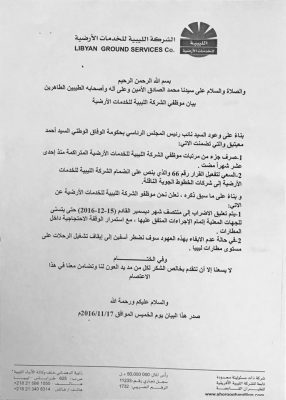 Misrata airport is due to reopen today after striking baggage handlers agreed to suspend their action for four weeks pending an outcome to their demands.

The workers started the strike on Saturday, saying they had not been paid for 11 months. As well as back pay, their other demand is that they be transferred from the Libyan Ground Services Company to either Libyan Airlines or Afriqiyah Airways. That way they would be eligible for health insurance and other benefits currently not provided by the ground handling operation although, like the two airlines, it is an affiliate of Libyan African Aviation Holding Company.

“They’re suspending the strike not because the problem has been solved but to allow people to travel and negotiators to fix the problems,” an official said.

In a statement the workers said that they were giving the employers until 15 December to meet their demands. Otherwise they would ensure a nationwide strike, closing all Libyan airports. In the meantime, protests at the airport would continue.

There was a similar strike over the same demands by baggage handlers at Migita airport in March after the employers agreed to pack back salaries.

Celebrations in Benghazi after LNA announce capture of Gwarsha