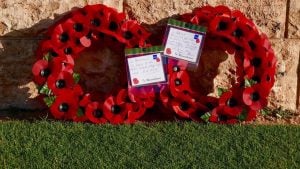 The World War II cemetery in Tripoli saw its first official Remembrance ceremony in the three years today, with British ambassador Peter Millett and his defence attaché Colonel Dougie Hay laying wreaths in honour of the soldiers buried there and elsewhere in Libya who died during the North Africa Campaign.

On the 11th hour of 11th day of the 11th month in 1918, the First Word War came to an end and many countries across the world continue to mark the day or the Sunday nearest it with a ceremony and a two-minute silence to honour all who have died in battle in service of their county – not just WWI but in all conflicts since.

Until 2014, remembrance services were held annually at Tripoli Military Cemetery since the Second World War at the cemetery which contains the graves of 1,393 allied soldiers, of whom 133 were never identified. These include not just Britons but also Australians, Canadians, Indians, New Zealanders, South Africans, Sudanese and other nationalities.

The land was gifted by King Idris.

There are numerous World War cemeteries in Libya, notably in Cyrenaica. In 2012, in an early portent of the chaos and violence soon to beset the city, Benghazi Military Cemetery was attacked by militants and dozens of gravestones damaged. Since then many have been repaired.