Fighting in Tripoli as pro-PC forces move to crush militants 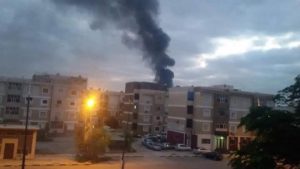 Intensive fighting broke out in Tripoli today in number of areas of the city in what appears to have been a pre-emptive strike by militias loosely linked to the Presidency Council to crush militants linked to grand mufti Sadek Al-Ghariani, former Tripoli “prime minster” Khalifa Ghwell and the Libyan Islamic Fighting Group (LIFG).

While casualty figures are unknown, a number of civilians are said to have been killed in Abu Sleem. There the local militia headed by local Abdul Ghani Al-Kikli (also known as Ghneiwa) were involved in fighting against a number of Misratan and other units supporting Ghwell. Seven bodies were reported to have been taken to the neighbouring Hadba hospital.

Clashes have also also reported around the Rixos hotel complex, home to the former General National Congress which Ghwell and his supporters have held for the past month. A convoy belonging to Haithem Tajouri’s Tripoli Revolutionaries Brigades (TRB), which is in alliance with Ghneiwa and the RADA (“Deterrence”) forces led by Abdul Raouf Kara, was seen during the day heading towards the complex in what is thought to have been a bid to eject the hardliners.

Ghneiwa’s forces claimed the clashes started when a unit tried to take over the zoo, which is opposite Abu Sleem and where he keeps his armoured vehicles. It borders both Bab Ben Gashir and Bab Al-Aziziya. In fact, it appears that it was Ghneiwa’s forces that tried to seize Camp 77 next to Bab Al-Aziziya and which has been in the hands of the hardliners for some time.

Fighting is still reported to be taking place there this evening, with the hardliners still holding on.

Meanwhile, this evening, the TRB put out a statement on its Facebook page “apologising” to the people of Tripoli, saying in effect that the situation was such that there had to be a fight in the city. It has, however, been slowing expanding its control over the capital in recent weeks, taking over new locations.

Also this evening, a unit from the RADA (Deterrence) force headed by Adbul Raouf Kara, took over the Mahary Radisson Blu hotel in the centre of Tripoli; it was being used by the hardliners. It also seized the nearby headquarters of the so-called 6th Division. Headed by Naem Duaibi, its has been part of the hardliners’ military alliance.

Duaibi’s brother Diya was reported killed in the fight today at Camp 77.

Other locations in the city area said to have been secured during the day by RADA and the TRB, including the Central Bank of Libya and the foreign affairs ministry.

Clashes at the southern suburb of Qasr Ben Gashir, near the destroyed Tripoli International Airport, appears to be a separate fight and according to one source started after a Misratan unit there attacked Wirshefana forces in the area. This, though, this has not been confirmed.

Meanwhile claims that Mitiga airport, east of the city centre, has been attacked, are not true. It was quiet throughout the day. However, yesterday RADA forces attacked a camp near Suq Al-Juma held by the Benghazi Defence Brigades, themselves allied to Ghwell and the radicals (some of them from Misrata) linked to Ghariani.

An explosion of violence in Tripoli has been widely expected as a result of intensifying animosity between the various armed factions in the city following the revelation last week that a senior imam linked to Ghariani, Sheikh Nadir Al-Omrani, had been murdered. It has brought into sharp focus the divisions between the Ghariani/Ghwell/Benghazi and Misratan radicals on the one side and the RADA/Ghneiwa/TRB alliance on the other. The former tried to link RADA to the killing.

In a move that may have triggered today’s action by RADA, the TRB and Ghneiwa, Ghwell’s predecessor as Tripoli “prime minister”, Omar Hassi, announced yesterday that a “supreme council of revolutionaries” was being set up to take over running the country.