Libyan oil has to be depoliticized and demilitarized: NOC chairman Sanalla 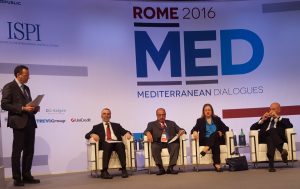 ”Is Libyan oil a blessing or a curse?’’ asked National Oil Corporation (NOC) chairman Mustafa Sanalla speaking today at the Mediterranean 2016 Dialogues here in Rome. ‘‘It is the lifeline of the Libyan economy employing 65,000 people and providing 95 percent of foreign export earnings’’

However, he noted that ‘‘The Libyan Political Agreement (LPA) signed in Skhirat (Morocco) nearly a year ago makes no mention of oil. Six years after the 2011 revolution: how should Libyan oil wealth be distributed – has not been addressed in any meaningful way’’, noted Sanalla.

Sanalla then preceded to present a short thesis on rentierism and the limits on democracy that you would expect from a student of politics and not from an oilman. ‘‘Oil has an anti-democratic effect’’ and the reasons for Libya’s 2011 revolution was ‘‘to replace authoritarianism with accountable government’’. Oil revenues, he said ”allow governments to buy-off the public. Rentierism ‘’leads to weak government institutions’’, he explained.

‘‘I fight every day to keep the NOC’s independence and to keep it out of politicians’ hands’’, he revealed. ‘‘If the NOC remains independent, Libya can pass to democracy’’, he boldly predicted.

Sanalla restated that Libya had lost over US$ 100 bn of oil revenues and over US$ 3 bn in infrastructure damage as a result of oil facilities closure by militias and fighting since 2011.

He confirmed that ‘‘negotiations are ongoing’’ with regards to the reopening of the Reyayna pipeline valve that is reducing production from western oilfields, without elaborating. It is worth recalling that there has been news of these ongoing negotiations for months, but no solution seems to have been reached with the Zintani militia forcibly reducing the flow of oil at the Reyayna valve.

‘‘Oil has to be depoliticized if Libya is to make a transition. The NOC must remain politically neutral. I resist attempts to make political appointments in the NOC. Our oil has to be demilitarized’’, he said not clarifying if he was referring to Jathran or sending a message to Hafter.

‘‘Oil can be a cornerstone of Libyan stability. The NOC is one of the few state institutions still working’’

Sanalla lamented the fact that ‘‘most fuel smuggling is controlled by the Petroleum Facilities Guards, (PFG), unfortunately’’. We should be a rich country but the curse of oil has made Libya ‘‘bankrupt’’, he claimed.

On the latest oil production figures Sanalla said Libya is currently producing about 600,000 bpd ‘‘after the eastern oilfields were ‘’liberated’’. This had risen from about 220,000 in September. He hoped that by the end of the year production could rise to 900,000 bpd if production is resumed from western oilfields. ‘‘We still have exploration activity despite these difficult times. We are still working’’, he concluded.