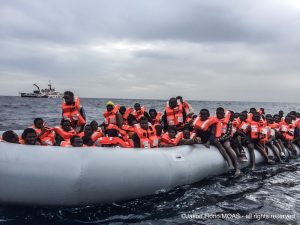 The EU has been warned that people-smuggling in Libya is now a major part of the economy, worth hundreds of millions of dinars.

In a report to EU’s 28 member states, Rear Admiral Enrico Credendino, who has headed the European Union Naval Force Mediterranean (EU NAVFOR MED) for the past 18 months, estimated that trafficking was generating over $300 million a year.

Some 350,000 migrants have made the journey across the Mediterranean Sea this year, with 4,690 dying en route. Traffickers have been charging around $1,000 per person for the sea passage to Europe, although the figure is believed to have fallen to around $500.

Reporting on the performance of EU NAVFOR MED’s Operation Sophia during the first ten months of 2016, Credendino warned that Islamic extremists have been increasingly involved in the trade.

“Al-Qaida and AQIM (Al-Qaida in the Islamic Maghreb), aligned with the Tuareg tribe in southwestern Libya, are assessed to be financially exploiting these smuggling routes,” he said.

To make patrols more effective, the Italian naval commander said, they needed to operate inside Libyan territorial waters. But that could not happen for the moment.

“It is clear that the legal and political pre-conditions have not been met,” he said, indicating that greater cooperation with the Libyan authorities was needed.

If the EU naval vessels are to operate inshore, it will require the permission of the Libyan government (in this case the Presidency Council) and a vote in favour by the UN Security Council.

Meanwhile, as part of Operation Sophja, 78 members of the Libyan coastguard are training aboard two EU warships for three months.