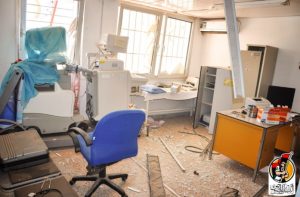 Sirte is being given $7.6 million to rebuild its Ibn Sina hospital, badly damaged in August fighting before Bunyan Marsous forces retook it from IS terrorists.

The money is also supposed to fund the reconstruction of four health centres, mobile clinics, ambulances and generators for the hospitals and two schools.  The funds were allocated today  by the Stabilisation Facility for Libya. This is run under the auspices of the United Nations Development Programme by a committee including representatives of the Government of National Accord and the international community.

Sirte now joins Benghazi, Obari and Kikla as beneficiaries of the SFL’s $32 million emergency funding to get public services back on their feet in towns that have been hit by violence. As the UK this week increased its backing for the SFL,  British ambassador Peter Millett  said “The people of Sirte withstood the horrors of Daesh and we will stand with them as they rebuild their lives”.

The SFL has in addition earmarked $2 million to bring back services at Sebha’s main hospital and to its health centres. The southern town, which has been racked by tribal violence, will also see the funds directed toward improved water supply and refuse collection

The UNDP’s Libya director Noura Hamladji, said “The families should be able to have power and water in their homes, children should be able to go back to safe schools and hospitals must start running again and we are hopeful this package will achieve some of this”.

The GNA planning ministry’s technical cooperation director Essam Garbaa added: “This support could not have come at a better time as we hope the citizens in these two cities can start returning and feeling safe again and gain access to the services they need”.