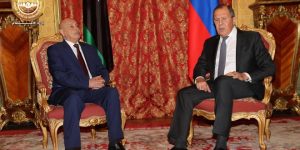 House of Representatives president Ageela Saleh has had what a media aide described as “fruitful” talks in Moscow with Russian foreign minister Sergei Lavrov.

According to the HoR, Lavrov praised the efforts of the army against terrorism and repeated Russia’s support for the legitimacy of the political process.

Russia backs the Libyan Political Agreement but is insisting that until parliament has accepted a Government of National Accord cabinet proposed by the Presidency Council, there is no working government in Tripoli.

This apparently did not stop the Russian ambassador Ivan Molotkov from meeting GNA defence minister Colonel Mahdi Al-Barghathi on Monday for talks said to have dwelt on the maintenance of Russian-made military equipment within the control of the PC .

Saleh and Lavrov are also reported to have discussed  the economy as well as security and action against terrorism. It is possible that a further issue of Russian-printed Libya dinars was raised by Saleh as a way of easing the continuing cash shortage in the east. The first shipment of this LD 750 million of “Russian” currency arrived at Labraq in June.

Saleh’s Moscow visit follows the three-day trip at the end of last month by Khalifa Hafter, commander-in-chief of the Armed forces.

At his Tripoli meeting with Barghathi this week, ambassador Molotkov invited the defence minister-designate to go to Moscow. The Russians are still seeking the release three of their sailors  arrested when the tanker tanker Temeteron was seized in June on suspicion of fuel smuggling. The men are thought to be detained in Tripoli along with other non-Russian crew members.