Hafter calls on troops to be ready to “liberate” Tripoli 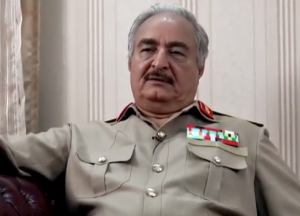 The head of the Libyan National Army, Field Marshal Khalifa Hafter, has called on officers and soldiers to be ready for the offensive to free Tripoli. He was speaking to members of the LNA. A top LNA official confirmed to the Libya Herald this evening that Hafter had made the call.

Exactly what sort of offensive Hafter intends was not stated. He has previously stated that he would never go to Tripoli if it involved a fight. However, although there are reports of him being in contact with some forces in the capital, it is generally thought that any attempt by LNA forces to take Tripoli will unite the currently divided militia forces there against them.

For the past two and a half years Hafter has been regularly predicting the liberation of Benghazi.

Hafter also spoke about the rape case in Tripoli, saying that he had been deeply upset by it, as if it had affected him personally.