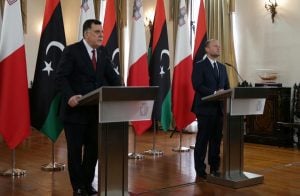 Finding a way to solve Libya’s divisions as well as terrorism and migration were at the top of the agenda in talks today in Malta between Presidency Council head Faiez Serraj and Maltese prime minister Joseph Muscat.

Muscat stressed, however, that migration was linked Libyan security, border control and its economic development.

He also suggested although Malta recognised the PC, Khalifa Hafter should have a role in Libya’s government but it was up to Libyans to decode how that should be. Nonetheless there has to be civil control over the military.

“Our role is to see that wherever we might have influence, we it to let it be known that there is space for everyone within this political agreement,” he said. “It is up to the Libyans to decide what role they want for General Haftar and the army. We appreciate the argument that there should be civil oversight of military personnel.”

Muscat also promised that Malta would be one of the first countries to re-open its Tripoli embassy in Tripoli when the security situation improved.

Faiez used the occasion to appeal to Libyans to work together for the good of the country.

“I take this opportunity to send a message to my Libyan fellows, parties and partners: we should put our disputes aside and work together on our common cause, which is terrorism,” he said minister said after the meeting.

Muscat later tweeted that Malta was committed to putting the situation in Libya and the Central Mediterranean high on the EU agenda during Malta’s six-month EU presidency which starts on 1 January.