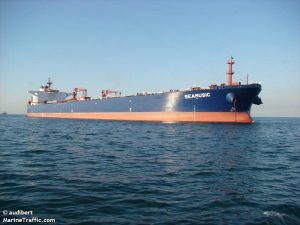 The first tanker to moor at the Sidra terminal since it was attacked two years ago by Libya Dawn forces and several of its oil storage tanks set on fire has taken on cargo of crude oil. According to reports, the tanker is the Maltese-registered SeaMusic.

The 62,775-grossweight tonnage tanker was recorded today heading for the the Augusta oil refinery in Sicily

A second tanker is expected to load oil at Sidra before the end of the month.

Force majeure was lifted at Sidra and nearby Ras Lanuf in September following their takeover by the Libyan National Army. The first tanker to take on oil at Ras Lanuf was also Maltese registered, the SeaDelta. Both are managed by the Thenamaris group.