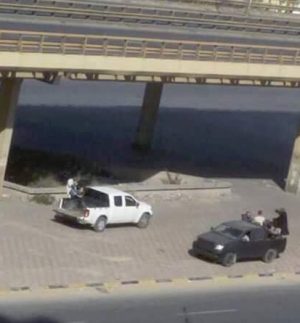 There were heavy clashes today in Tripoli’s Hay Al-Akwah area, by the elevated Airport Road next to the Abu Sleem district.

According to reports they started after an armed group tried to take the area from the so-called Abu Sleem Central Security Force, headed by Abdul Ghani Kikli (also known as Ghneiwa). This in turn had supposedly followed the arrest by Ghneiwa’s forces of a man allegedly involved in robbery and murder.

After armoured vehicles were deployed to the area it returned to Ghneiwa’s control. The elevate section of the Airport Road remain closed for some time, however.

However, in an increasingly common military chain reaction in Tripoli, when one group moves all others move, largely to secure their territory. This appears to have again been the situation in the city today. There were unconfirmed reports of shots fired in Tajoura.

The city’s various militias are seen as nervous after Khalifa Hafter’s call this week to the Libyan National Army to be ready to march on Tripoli.