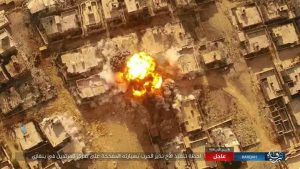 IS says this is the moment of today’s explosion

Terrorists in the besieged Benghazi enclave of Ganfouda today mounted a car bomb attack which was filmed by an IS drone.

Seven soldiers, including another senior office died today. Mustafa Saaiti, commander of 276 Brgade was killed in a land mine explosion.

The dramatic IS pictures showed the moment when a suicide car bomber detonated his or her explosives in the middle of a Libyan National Army position, which included two tanks and a number of technicals.  The spot was open ground near the Customs warehouse from the terrorists were driven two weeks ago. 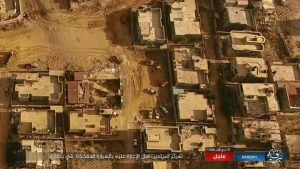 The first drone picture before the attack was taken from a different angle to that of the blast itself. A later picture showed a huge cloud of smoke and dust over the site. There are unconfirmed reports of a second car bomb attack.

IS claimed that both of the tanks and ten vehicles were destroyed. Until the pictures were posted, an army source had privately denied any attack. So far there has been no official comment.

Meanwhile in Tobruk, large crowds turned out today for the funerals of the three members of the 309 Tobruk Brigade killed yesterday in Ganfouda.