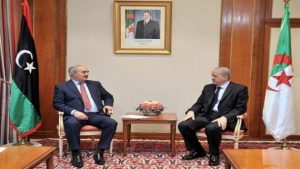 Field Marshal Khalifa Hafter flew to Algiers today at the invitation of the Algerian government for talks on the situation in Libya. He was accompanied by the head of his airforce, Saqr Geroushi.

The visit comes a day after Ageela Saleh, the President of the House of Representatives, was also in the Algerian capital for talks with the country’s minister of Maghreb, African and Arab affairs, Abdelkader Messahel.

The invitation to Ageela Saleh and Hafter is part of a new initiative by Algeria to try and find a solution to the Libyan crisis, independent of that by the international community, and based on a new Libya-Libya dialogue.

In pursuit of this Algiers is reported to be talking to or planning talks with a number of key political stakeholders on all sides of the divide.

Commenting on the talks with Sellal, an official in his office was quoted saying that “the only alternative remains the political solution based on the inclusive inter-Libyan dialogue and national reconciliation, which Algeria works for.”

The same language was used about yesterday’s talks with Ageela Saleh.

“The importance of an inclusive inter-Libyan dialogue which leads to a solution to the crisis and to national reconciliation was emphasised,” the Algerian state press service quoted a government official saying.

Meanwhile, the Chadian foreign minister, Moussa Faki Mahamat, who is attending a conference on peace and security in Africa being held in Algeria’s second city, Oran, has said that a delegation of African leaders will visit Libya shortly to promote Libya-Libya dialogue within the framework of the Libyan Political Agreement.