The Tripoli-based Libyan Businessmen Council (LBC) has announced that it has reached an agreement with the Italian embassy in Tunis to speed up Schengen visas for its members.

The LBC reports that the Italian consulate has agreed to speed up the booking of appointments for ‘’multi-entry’’ Schengen visas of ‘’long duration’’ for LBC members who fulfil the needed documentation and proof of business links with Italy.

The LBC statement says that it will be able to book visa interview appointments for members and that once the visa is ready members will not have to personally collect their visas in Tunis.

In a similar vein, it will be recalled that in November, the British authorities announced that all Libyans applying for a British visa in Tunis could now retain their passports until they received a decision on their visa application. Previously the British consular section used to keep passports which forced Libyans to remain in Tunis until a decision was reached. 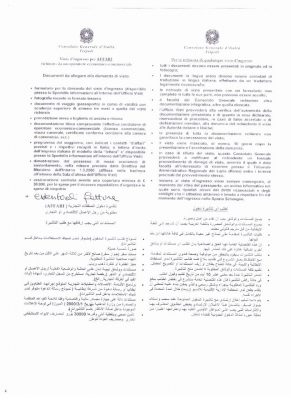