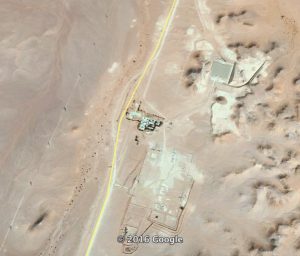 There are confused reports that IS terrorists have seized a remote pumping station on the Man-Made River, taking hostages and sacking the place before withdrawing.

The attack appears to have been mounted early today on the location some 60 kilometres north of Ash Shwayrif, along an unmetalled road.

A Google Earth image shows what appears to be a large rambling building on the site. A short distance away is a more substantial square structure which might be an engine house or storage tank.

It is not known how many workers and guards are normally at the pumping station.

Petty criminals have in the past broken into remote MMR  installations and stolen valuable metal and high technology equipment.