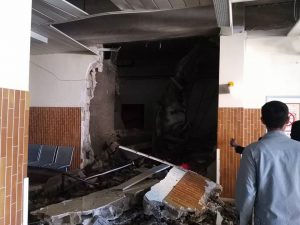 The first blast was on the third floor where wounded soldiers are being treated. The second was in the reception of the Accident and Emergency department. The device is thought to have been hidden in a cupboard. Remarkably no one was seriously hurt in either explosion although damage was extensive.

Anger among hospital workers is the greater since it was only 20 days ago when a suitcase bomb blew apart a fifth floor lavatory. After that attack, hospital managers vowed they would step up security around the hospital.  Police have not commented on a report they suspect the bombs may have been planted by someone with regular access to the complex.

Meanwhile at Jalaa hospital surgeons removed a bullet from the shoulder of a 45 year-old woman. A sniper in Sabri had reportedly hit her outside her home which is on the edge of the district. It is being said that at the time of the shooting there was no one else near the victim. This is being taken to prove that the terrorists in Sabri are deliberately targeting civilians. 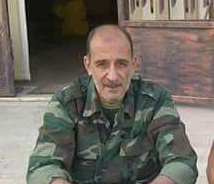 The army advance on Ganfouda appears to have paused. Little official information is being given out.  However, yet another senior army officer is known to have perished today. Brigadier Fathi Alsnvaz, commander of the engineering unit of the Zawia Martyrs’ Brigade was killed in a land mine explosion.