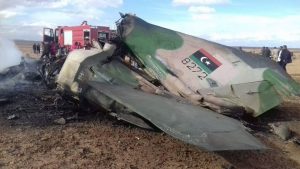 A MIG 23 crashed yesterday whilst on training near Tarhuna southeast of Tripoli (Photo: Tarhuna Council).

The MIG, which took off from Tripoli’s Mitiga airport, was reported to have been taking part in training when it crashed.

No details have been revealed of the exact causes of the crash, but it is believed to have been a technical fault. Libya’s Air Forces, representing both political divides, have been forced into using old fighter jets as a result of the official UN arms embargo still in place.