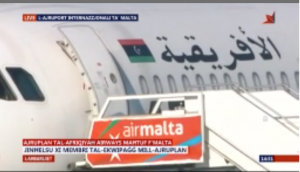 All passengers and crew have been released from an Afriqiyah Airways Airbus which was hijacked to Malta while on an internal flight from Sebha to Tripoli today. After a three-hour standoff, they were slowly released, starting with the women and children, following negotiations between the Maltese authorities and the two hijackers.

The hijackers remain on board, however.

Both were said to supporters of the former Qadddafi regime and had claimed they had grenades with them.  After the passengers and crew were released one of them appeared at the aircraft door with a green flag.

It was later revealed that one of their demands was political asylum in Europe.

The flight was an internal one from Sebha’s Tamenhint airport to Tripoli Mitiga with 118 people on board – 111 passengers and the rest crew. Among the passengers were 28 women and at least one baby.

All, apart from a Pakistani and one man from an unnamed African state, were Libyan. Reports that a member of the House of Representatives was one of the passengers on board the Afriqiyah Airbus have not been confirmed.

The plane landed at 11:35 at Malta’s Luqa airport and was immediately moved to the eastern section, by the old airport, where negotiations then started.

Ironically, the area is where a new film on the 1976 raid on Entebbe is being shot.

During the negotiations, Maltese Prime Minister Joseph Muscat phoned Presidency Council head Faeiz Serraj to inform him of what was happening.

Passengers were seem to be extremely calm as they disembarked, leading to suggestions that the hijacking was not unexpected.