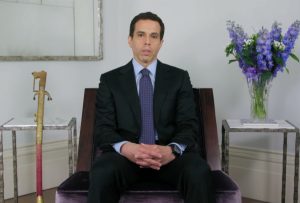 In a speech to mark Libyan Independence Day, Prince Mohammed El Senussi, the son of the late Crown Prince Hassan, has warned Libyans not to rely on foreign governments to solve the country’s problems. These had their own interests and agenda, he said.

“We have to solve our problems with our own hands,” he declared in a video broadcast on the 65th anniversary of the country’s 1951 independence. “We cannot rely or depend on others, because others will not have mercy towards us and will not look after our well-being and safety,” he declared.

Such other countries had their own agendas “which differ from our interests and objectives”, he said.

Instead, rather than looking elsewhere, Libya’s politicians had to shoulder their responsibilities and work out a solution to the Libyan crisis.

During the 18 years of the monarchy under King Idris, the country’s politicians had done precisely that, he said.

The prince added that he was well aware of those was wanted a return to the 1951 constitution and the constitutional monarchy before Qaddafi’s seizure of power in 1969. However, while it would be an honour for him to serve the country and Libyan people, he could not do so unless there was a national consensus.

“Only Libyans have the right to bring about such a consensus.”

If there were such consensus, though, it would bring about stability, he said.

Blaming the present troubles on the Qaddafi regime which had destroyed the core values on which Libyan society had been built, he stressed that the monarchy of King Idris had been based on respect for the constitution and the law as well as on the peaceful transfer of power through free elections.

For Libya to again be stable and peaceful, he explained, it had to again live under the sovereignty of a constitution, the law and a just government.

Today, five years after the 2011 revolution, “we find ourselves at another turning point,” he stressed.

“We all have to come together, hand in hand, to protect our national, religious and moral values. We have to preserve our heritage and respect the memory of our forbears who gave us our independence.”