LNA conducts airstrikes against BDB in Jufra base 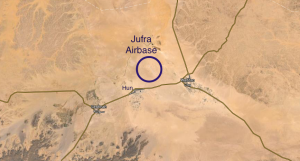 The Libyan National Army’s (LNA) Air Force, allied to Khalifa Hafter and the House of Representatives (HoR), conducted airstrikes against the Benghazi Defence Brigade in the town of Hun, Jufra. Hun is located three hours’ drive to the west of the eastern oilfields currently under LNA control.

Libyan media photos show collateral damage to vehicles and buildings of the Tagrift base which was a former Military Police HQ.

Speaking on Libyan TV yesterday, LNA spokesman Ahmed Mismari said that the LNA was ready for any BDB attack and that the BDB’s actions on the eastern oilfields were carried out partly in hope that the LNA lift its siege on the Ganfuda district of Benghazi. The BDB’s allies are surrounded by the LNA in Ganfuda.

On another note, Mismari also said that soon there will be an endorsement for the LNA to enter Tripoli in order to protect civilians.

The attack has been well telegraphed as the BDB have been sending open signals of their intent to attack and takeover control of the eastern oilfields. Equally, the LNA has also been openly signalling its readiness to pre-empt or repel any BDB attack.

Yesterday, Presidency Council (PC) boycotting member Omar Laswad, who is from Zintan, had warned of a new looming military attack against the eastern oil terminals by the same forces that had attempted to take it over at the beginning December.

The BDB are supported by the proposed Defense Minister of the GNA Mahdi Bargathi and are deemed loyal to the Grand Mufti Sadeq Ghariani. Ibrahim Jadran as well as PC member Mijibri are also believed to be in support of the BDB.