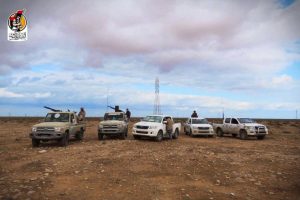 There is growing concern that terrorists from Sirte are regrouping in the hills near Bani Walid. Bunyan Marsous forces have joined police from the town to scour the area for what are thought to be IS training camps.

The BM media office has published pictures of technicals and their crews forming road blocks and heading out on patrols.  The operations room in Bani Walid is meanwhile reported to have strengthened local security. BM forces are operating out of the town’s police station.

The extent of the intelligence that has led to the belief that terrorists are concentrating in the area is unclear.  There are unconfirmed reports of the arrest and questioning an unarmed IS fighter who confessed that he had managed the escape from Sirte just before it fell. He may have been heading toward a pre-arranged rendezvous.

It is not thought there have been any engagements with terrorists around Bani Walid.  Nor is clear that there has been any aerial reconnaissance.  Nevertheless it is clear why BM commanders would want to find IS camps. Well before the fall of Sirte, sticks of terrorists were being fed out of the town.

In the last weeks of the campaign, a series of gun and IED attacks was launched on both military and civilian vehicles running between Misrata and Sirte. These were blamed on IS members. At one point security on the highway became so bad, there was a ban on overnight travel and BM commanders tried to organise guarded convoys.

Meanwhile the Libyan National Army today announced it had set up a checkpoint on the coastal highway just 65 kilometres east of Sirte near Harawa.  The LNA says that the position is due to be built up and reinforced in the coming days.

Earlier this month the army beat off an attack on Ben Jawad and Nufliya by the Benghazi Defence Brigade and members of Ibrahim Jadhran’s Petroleum Facilities Guard. Bot small towns had been taken by the army at the end of its advance into the oil crescent export terminals.

Now pushing its frontline further towards Sirte may be designed to give better warning of a renewed attack by the BDB and PFG forces or an assault by IS groups. The terrorists last sought to attack the Sidra  and Ras Lanuf terminals this January when they were still in control of Sirte.