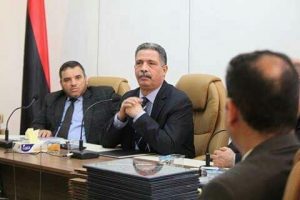 Matouk was speaking at a forum on the Libyan transport sector held in Tripoli yesterday organized by the Libyan African Aviation Holding Company – which owns both the main state airliners Afriqiyah Airlines and Libyan Airlines.

Matouk gave no details on the rebuilding project of TIA nor on the Italian construction company. Libya Herald’s request for further information on the Italian company from the Italian embassy based in Tunis have had no responses.

It will be recalled that in October this year a consortium of Italian companies specializing in airports had visited the remains of the destroyed TIA, the Libyan Airports Authority (LAA), part of the Libyan Transport Ministry had reported.

They were accompanied by the chairman of the LAA and the General Manager of TIA. The LAA had said that the consortium had conducted a field visit to conduct a survey of the site with a view to construct a passenger terminal and other amenities.

The LAA had said that the Italian consortium would present an offer for the reconstruction of TIA.

It will be recalled that TIA was destroyed during inter-militia fighting in summer 2014 when the GNC-Misratan backed militia, Libya Dawn, attacked Zintani militias controlling the airport and totally destroying TIA.