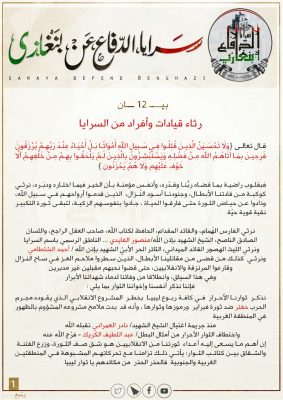 The Benghazi Defence Brigades (BDB) says that its spokesman and another leading member of the group were killed during last Wednesday’s attack on the oil crescent area. It also accuses Europe and the West of being behind a number of kidnappings and killings in Tripoli, including that of Salafist cleric Sheikh Nadir Al-Omrani.

In a statement today, the BDB said that its spokesman, Mansour Al-Faydi, was killed in Libyan National Army airstrike on Jufra airbase. Another commander, whom it named as Ahmed Al-Shaltami, later died of wounds received in a subsequent air raid on the base. A number of other, unnamed fighters were also said to have died.

Shaltami was reportedly a leading member of Ansar Al-Sharia in Benghazi – part of the Benghazi Revolutionaries’ Shoura Council – before being forced to flee the city.

The BDB also claims that Libyans acting as agents of Europe and the West were behind the abduction and killing in Tripoli of Al-Omrani and of Abdul Latif Al-Kreek.

Al-Kreek was one of the commanders of the Bunyan Marsous operations room. He disappeared in Tripoli on 15 November. An alleged supporter of the so-called Islamic State who was arrested and is being held in the capital has supposedly confessed to involvement in his kidnapping and murder. A video of his confession was published today. Significantly, it shows signs of him having been beaten on the head.

In its statement, the BDB also claimed that the West’s Libyan agents were planning to kill a number of other radicals including Ziyad Belam (former head of the Omar Mukhtar Brigade in Benghazi), Ismail Salabi (a former commander of the 17 February Brigade), Benghazi militants Ahmed Majberi and Nasser Al-Maqsabi (0ne of the leaders of Libya Shield No 1 brigade).