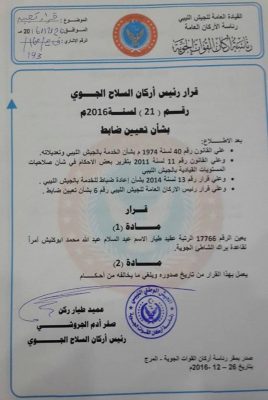 A new military governor for the oasis of Tazerbu, some 250 kilometres north-west of Kufra, is one of two appointments just made by Major-General Abdul Razzak Al-Nazhuri. The other is a new commander for the Brak Al-Shatti airbase taken by pro-LNA forces three weeks ago.

In the latest dismissal of a democratically-elected mayor, Major Muftah Al-Gamati has been made military head of the Tazerbu municipality, which comprises a number of villages in the oasis.

Some 750 kilometres further west, Air Colonel Abdussalam Abu Kalesh has been appointed commander of the Brak airbase. The move would consolidate LNA control over it. Since being taken three weeks ago it has been under the control of forces led by Colonel Mohamed Ben Nayel, largely made up of regular army troops from the Magarha, Qaddadfa and Tebu communities.