Mass breakouts from Ganfouda and Sabri 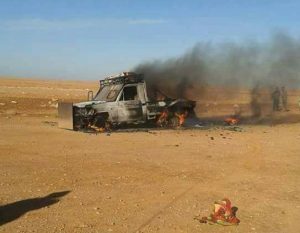 At least 13 police and soldiers are reported to died in an overnight breakout from the besieged Benghazi terrorist enclaves of Ganfouda and Sabri.

A column of vehicles is reported to have bust out of Ganfouda and headed south towards Suluq. They are said to have included Wissam Ben Humaid, the militants’ leader. He is thought to have escaped.

A running battle, including airstrikes, then started nearby with at least one technical in the column destroyed.

Meanwhile, a second group of terrorists burst out of Ganfouda north towards Benghazi. A solider was killed at a checkpoint in Sidi Faraj and two police officers were gunned down near Benghazi Medical Centre. It appears that this escape included a car bomb, possibly without a driver, which however is said to have failed to detonate and was captured intact.

Some of the police dead and injured came in the third breakout when a vehicle clad in steel plate smashed its way out of Sabri. Among the dead there was traffic policeman. Three terrorists were also killed but it is being said that at least two more managed to escape into the city.

Several schools in Benghazi have not opened their doors today after the reported discovery of of explosive devices in a school near the passport centre in Al-Majuri. Banks too have been ordered to close and many people are staying indoors.

These three break-outs would appear to have been coordinated and to have taken security forces by surprise after more than a week’s lull in the fighting. They occurred during a city-wide power cut.  It is understood that a GECOL control room staff member has been arrested.