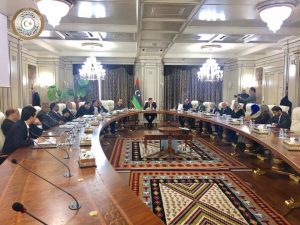 In two strongly-worded statements today, Presidency Council (PC) head Faiez Serraj has come out firmly in support of both NOC chairman Mustafa Sanalla’s no-holds-barred attack on Tuesday on fuel smugglers, and raids by the Rada (Deterrence) forces on Friday against drug dealers and suspected criminals in Tripoli.

Echoing Sanalla’s broadside in which he publicly accused Zawia’s Nasr brigade of involvement in smuggling fuel from the town’s refinery, Serraj accused what he called a “handful of people” of smuggling fuel and oil products through Libya’s seaports. They were driven by greed, he said.

Orders had been given to the coast guard, he added, to stop any vessel believed to be smuggling fuel.

Unlike Sanalla however, he did not name individual suspects or the places where the smuggling is taking place, although he did state that the authorities had a list of names.

In a separate statement, Serraj poured praise on the Rada forces for their raids in several parts of Tripoli on Friday against drugs and weapons dealers and other criminal groups.

Conveying his condolences to the family of one of the Rada officers who was killed in Friday’s raids, he added that Rada would continue to have the PC’s full support in cracking down on criminal gangs in the city.

It was one of the strongest statement of support for Rada which, led by Abdul Raouf Kara, is itself one of the prime militia groups backing the PC.

Significantly though, there has, still been no comment whatsoever so far by Serraj or the Presidency Council about the resignation of Musa Koni from its ranks.