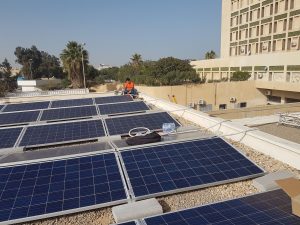 In a move to help hospitals in Tripoli cope with the incessant power cuts which have been averaging 13 hours a day, the United Nations Development Programme (UNDP) is funding the installation of solar power panels.

So far, in what is believed to be the first time solar power has been harnessed for hospitals in the country, panels have been installed at the Abu Sleem hospital. They are being used to ensure a steady supply of electricity to its intensive care unit.

However, there are planned to install panels at Tripoli Medical Centre as well as the Ali Omar Askar Neurosurgery Hospital south of Tripoli International Airport and the Cordoba Centre for Services and Renal Hemodialysis.

Both the latter have had difficulty functioning because of the security situation.

It is expected that the use of free solar energy will permit the continuous running of dialyzers, medicine refrigeration units, surgery rooms and ICUs at all four hospitals.

“When all are up and running, the panels will help boost the health sector in the country because about 50,000 Libyans will be able to go to hospitals where there are no electricity problems and can enjoy proper health care,” said Noura Hamladji, UNDP Libya country director.

The funding is coming from the UN Central Emergency Response Fund (CERF).

CERF was a major contributor last year to the UN-led Libya Humanitarian Response Plan (HRP) which has an overall spending target of $165 million. This is to go on a variety of projects including those for refugees and migrants as well as communities directly affected by the country’s low-level civil war.

In its report published in November, the HRP plans to spend $151 million in 2017 helping some 940,000 people, providing urgent healthcare needs and essential medicines as well as ensuring access to basic goods and services such as food, drinking water, sanitation services, education and adequate housing.